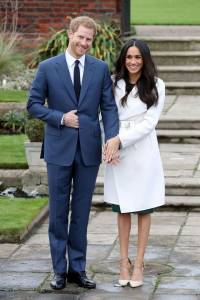 Kensington Palace confirmed via Twitter on December 15 that Prince Harryand Meghan Markle will marry on May 19, 2018. The couple’s decision to wed on a Saturday goes against tradition, as royal weddings usually take place on a weekday. The Duke and Duchess of Cambridge wed on a Friday and the Queen on a Thursday.

The chosen date falls on the same day as the FA Cup final at Wembley, a match that Prince Harry’s best man, the Duke of Cambridge, usually attends as president of the Football Association to present the trophy. The May date may also have been selected in order to give the Duchess of Cambridge time to recover after the birth of her third child, Prince Louis.

The invitations follow many years of royal tradition and have been made by Barnard Westwood. Using American ink on English card, each invite has been printed in gold and black, then burnished to bring out the shine, and gilded around the edge. The three-feathered badge of the Prince of Wales is given pride of place in the centre.

Will everyone get the day off for the royal wedding 2018?

Although the public were given a day off to celebrate the weddings of Prince Charles to Diana Spencer in 1981, Prince William to Catherine Middleton in 2011, and Princess Anne to Mark Phillips in 1973, Prince Harry and his fiancée’s choice to wed on May 19 avoids the issue of whether or not the royal wedding should be a bank holiday.

Pub opening hours on the Saturday might be extended to 1am – serving hours were relaxed following both Prince William’s wedding, in 2011, and the Queen’s 90th birthday, in 2016. The home secretary said of the possible leniency: “I hope that [a] relaxation of the licensing hours will allow people to extend their festivities and come together to mark what will be a very special moment for the country.”    Read More